The Studio Ghibli Series - Whispers of the Heart (or 耳をすませば)

On Sunday, I saw a 35mm print of Whispers of the Heart at the Aero Theater in Santa Monica. This is one of three Ghibli films which are hard to see in the United States. The other two are Ocean Waves and Only Yesterday. They're omitted from most DVD film collections. The Aero and the Egyption are screening the entire filmography this month as part of there Miyazaki series. 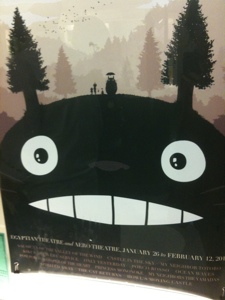 Whisper of the Heart or (耳をすませば), is a 1995 Japanese animated film based on the comic by the same name, by Aoi Hiiragi. It was directed by Yoshifumi Kondō and written by Hayao Miyazaki. It was the first theatrical Studio Ghibli feature to be directed by someone other than Miyazaki or Takahata. A sequel was made in 2002 titled the Cat Returns. Loosely based off a dapper cat statue named 'The Baron', the cat characters return in their own movie.

The Aero theater will be screening other rare Studio Ghibli films this month: Whispers of the Heart, Ocean Waves, and Only Yesterday.
at 1:27 AM